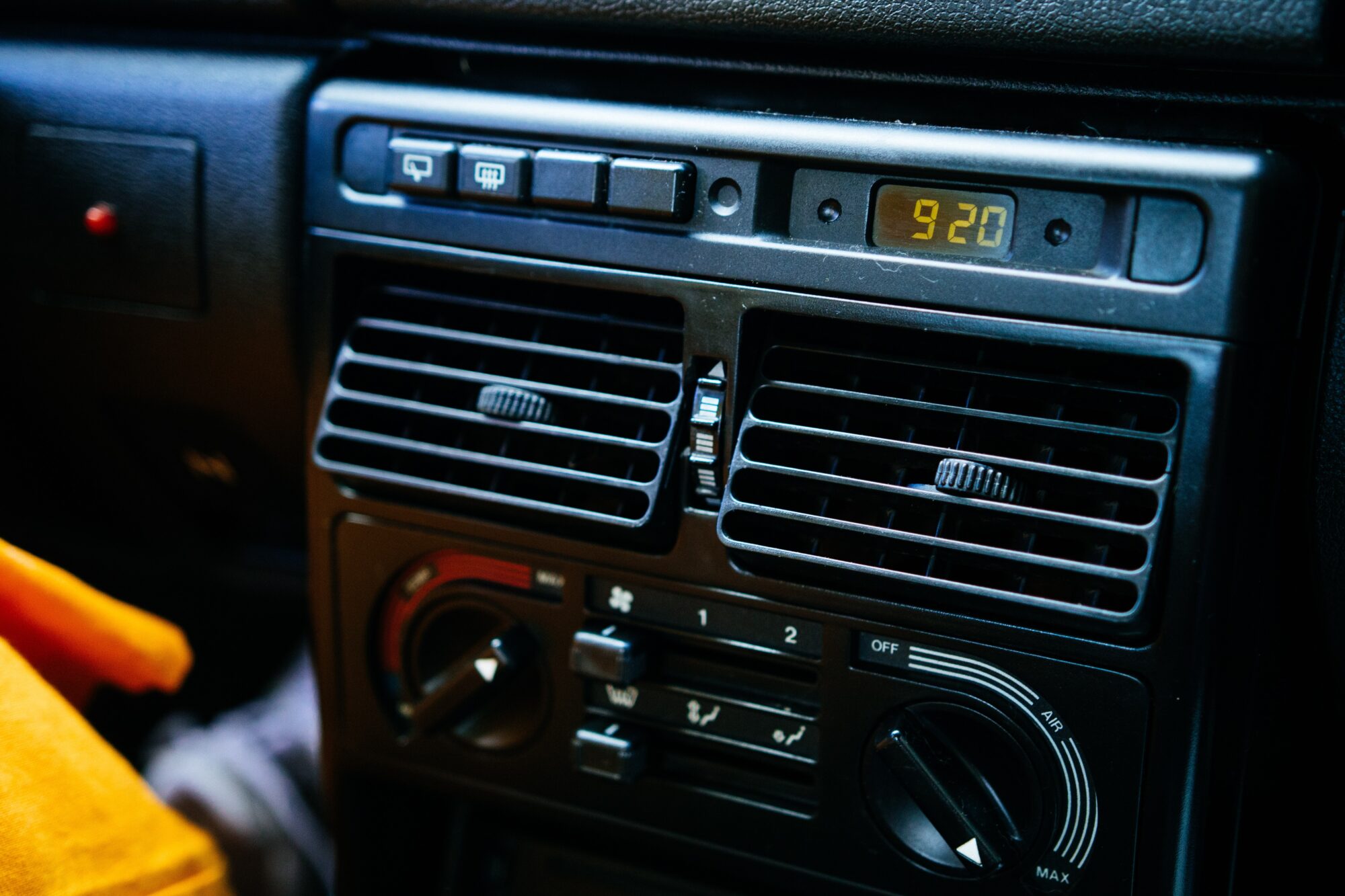 What is a car air conditioning system?

The traditional air conditioning system that most vehicles use circulates cool or warm air through a car by manipulating refrigerant (or coolant) between a liquid form and gaseous form. While the refrigerant changes states, it is able to absorb heat and remove humidity from the vehicle and circulates cool, dry air. The air conditioning system does this by controlling pressure and temperature within the vehicle.

How Does My Car Air Conditioning Work?

A car air conditioning system functions in a closed loop meaning there is no fixed start or end point as the entire cooling process happens all at once in all parts when the compressor clutch is engaged. The components of a car air condition include: a compressor, a condenser, an expansion valve, an evaporator, an accumulator.

The car air conditioning compressor is a simple engine driven pump that functions to compress the refrigerant gas. When the compressor clutch is energised by a driver or the control system, the pumping mechanisms compress and circulate the refrigerant, therefore pushes out cool air and begins the cooling processes. This compressor clutch will automatically cycle on and off when directly responding to the thermostats and pressure switches within it.

Mounted in the front part of the vehicle, behind the grill, a condenser reduces the temperature of the refrigerant while maintaining a high pressure. During this process, the refrigerant changes from gaseous state to liquid state as it cools and uses forced air, in the form of a fan, to transfer heat towards the cooler side of a vehicle's radiator. This sheds the extremely hot gas that is passed through a heat exchanger.

From the expansion valve, the liquid refrigerant enters the evaporator where it changes back to a gaseous state which causes a cooling effect. Cabin air is then cooled as ambient air is forced through ducts and vents into a passenger’s compartment through a blower motor system. The refrigerant is then. returned to the compressor via a low-pressure hose to restart the cooling cycle.

An accumulator (sometimes referred to as a receiver or dryer) is fitted to a vehicle within the air conditioning system to filter out impurities from the refrigerant and to absorb and contain any moisture that is present within the system.

How do I know when my air con needs fixing?

Air conditioning problems can range from your air con not cooling to weird noises coming from inside the system. These are tell-tale signs that your air con may need an essential service or that a full car service may be in order.

The first and most simple sign that your car air conditioner may need repairs or re-gassing is that you get no cold air from your A/C or no air coming through at all. Usually this is caused by a refrigerant leak and can occur at any time but most often due to a hole in a connection, hose, compressor, or a ruptured evaporator.

No Air Coming Through Vents

There could be several causes for no air flowing through a car's air conditioning system. These can include but are not limited to:

If a vehicle is dealing with some weird or nasty smells coming from the air conditioning system, it may be due to a build-up of bacteria.  These smells are common in older cars and cars that are used infrequently, sometimes being referred to as "sick car syndrome". This happens due to bacteria, micro-organisms, mold and fungus beginning to grow behind the dashboard surrounding the evaporator which can cause unpleasant odours. These smells can usually be fixed by using an anti-bacterial treatment that destroys the bacterial growth and leaves your car smelling fresh again.

Unordinary sounds coming from a vehicle can be alarming and cause for concern. If an air condition system functions with a rattling, banging, or other unusual sounds it could be as simple as leaves or road debris blocking the unit from functioning soundlessly. However, it could also indicate a worn bearing, worn air conditioning belt or that the air con's compressor's clutch has failed.

What is involved in a service or repair?

An air conditioning service usually includes excavating the refrigerant gas and replacing the lubricating oil while also carrying out a system leak test, a replacement cabin air filter may also be needed. Air conditioning maintenance is the best way to guarantee you comfort in the hottest months. This could be as simple as running your air con during winter months to keep the system well lubricated and leak tight keeping the seals and hoses moist.

How much do car air conditioning system repairs cost?

If you need your car air conditioning repaired, Enji can put you in contact with local mechanics in your area who can assist you.

Mechanics with Enji are able to assist in any of your vehicle needs.